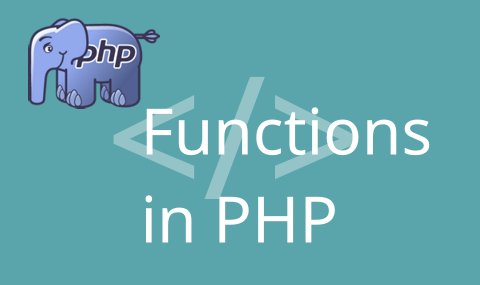 Functions in PHP or in any other programming language is a block of statements that are written to perform a specific task.

– Functions do not execute automatically whenever a page loads.

– A function call is needed to execute a function.

There are mainly two types of functions in any programming language –

Like any other programming, PHP allows you to define your own customised functions based on your requirement. Such functions are known as user-defined functions.

While creating a function in PHP, following rules must be followed –

– Function name must start with a letter or an underscore only.

– Function name are NOT case-sensitive in PHP

In the above example, we’ve created a function name welcomeMsg. The above declared function is then called using weclomeMsg(); statement.

Functions with arguments in PHP

Arguments are mentioned inside the parenthesis after the function name. A function can have multiple elements, the elements needs to be separated by comma.

In the above function firstName, we’ve an argument $fname, in which we’re passing different names. So in the output the last-name will remain same with different first names.

Also Read – IF Statement in PHP

This is Deepak Kumar, founder of True Infosystems and of-course the chief content creator at CodingLessions.info. Started my carrier as a Freelancer and now a top-rated Freelancer at Upwork, delivered over 200 successful projects with highly positive user ratings and counting.